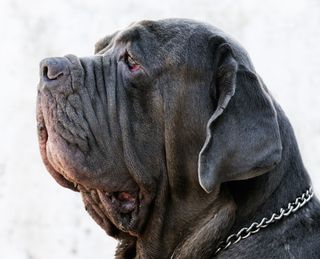 If you’ve seen any of the Harry Potter films then you’ll know that Harry’s giant chum Hagrid
has a dog called Fang. In the books Fang is a boarhound, but in the films he is a Neapolitan mastiff. (Actually four mastiffs. Three were used for the first three films and then one, Hugo, retired after the Prisoner of Azkaban and was replaced.) Anyway, the point is, Neapolitan mastiffs are big and fierce-looking enough to play a giant’s dog!

As is clear from their name, the dogs originate from the area around Naples in southern Italy and have long been used as guard dogs. They were originally fighting dogs used in the Roman wars. They also fought lions in the Colosseum. Let’s face it, a growl from one of these would probably send even the most determined intruder running. As they are notorious for sneaking up on their prey from behind, the hapless burglar may not get the chance to run though!

The breed was on the verge of extinction when it was saved by a group of Mastino enthusiasts including Piero Scanziani in the 1940s.

Like the literary Fang, Neapolitan mastiffs are big dogs. Measuring between 66 -79 cm at the shoulder and weighing from 70 and 90kg, these are no canine featherweights. The Neo has a wrinkly appearance, a resistance to pain and a fearless nature.Highly intelligent, they will defend their masters
and families without a second thought and are therefore excellent guard dogs. By the way, they are also known for their tendency to drool!

The Mastino is a popular guard dog, but they can also be family dogs if they are socialised early and are not placed in homes with small children. This is more in case they knock them over or otherwise hurt them through clumsiness rather than any tendency to attack them. They are big, big dogs although they are not hyperactive and are quite happy to sleep at their master’s feet.

Although large, these dogs have a turn of speed, especially when their precious family is under threat. As it says on one Neo website : “Whereas another breed of dog might bite the arm of a perceived assailant, the Neo might leave with the arm."

If you love your Neo or know someone who has one, then look into these great products that blazon your love for the world to see – and why not?